6 June 2022 | 0 Comments | By associat
In recent months, Iran has been experiencing various protests and at least eight large-scale uprisings Since 2017. Protests over social, economic, and environmental issues have escalated in Iran. When the November 2019 uprising with over 1500 victims erupted, both the regime and people knew the situation would never be the same. All sectors of Iranian society are being crushed under soaring inflation, rampant unemployment, meager wages, and widespread water shortages, as well as the Iranian regime’s repressive policies. While the regime ruling Iran is a well-know dictator which has destructive behavior at home and in the region. Backing up terrorist groups, making efforts to obtain nuclear weapons and suppressing it’s own citizens.
€0.00 donated
0 Donors

Protest began over the sudden spike in the price of food and other basic goods but have quickly turned into anti-regime protests with calls for regime change.

These protests are ongoing despite intense security measures and limited internet connectivity.

Following the recent protests in Iran, the state security forces, and riot police were dispatched to restive cities to confront the protests. 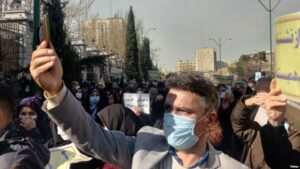 Though the exact number of people detained during the protests in Iran is not known, reports indicate that hundreds of protesters, including children, have been arrested. The detainees are in danger of maltreatment and torture. So far more than 20 people have been shot dead.

Social media reports, eyewitness accounts, and videos from the protests indicate that the state security forces resorted to unlawful use of force, by gunfire and mass arrests, in their ongoing crackdown on peaceful protests in several cities, leaving dozens of people injured.

Since the beginning of the protests, the Iranian regime has shut off or severely limited the internet in Khuzestan Province and the restive neighboring cities.

The regime has implemented an internet blackout to crush protesters without the world knowing. Similar measures were taken in November 2019 that led to the killing of 1,500 protesters.

Internet blockage observatory NetBlocks on Saturday reported a disruption lasting hours on Iran’s MobinNet. “The disruption is the latest in a series of telecoms cuts amid protests,” NetBlocks said on Twitter.

The Iranian regime has a documented history of using lethal force against peaceful protests while blocking internet access to prevent the world from seeing the brutal crackdown. 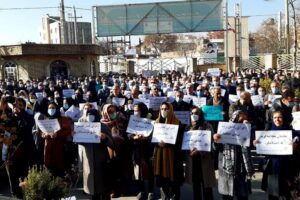 Call for immediate action for saving the lives of protesters and the arrested:

State-enforced internet outages, the heavy presence of security forces, using unlawful force against protesters, and mass arrests in recent days, have raised concerns about the regime’s deadly crackdowns such as those of previous years. The Iranian regime has a documented history of using lethal force to crush peaceful protests while cutting off internet access.

The regime continues with its crimes, recently a list of names of 5,370 prisoners sentenced to death and retribution in the clerical regime’s prisons, including numerous cases of placing political cases among ordinary crimes was revealed

According to the Prisons’ Organizations, 5,197 people are on death row or convicted of Qisas (retribution)

The destruction of the environment in Iran